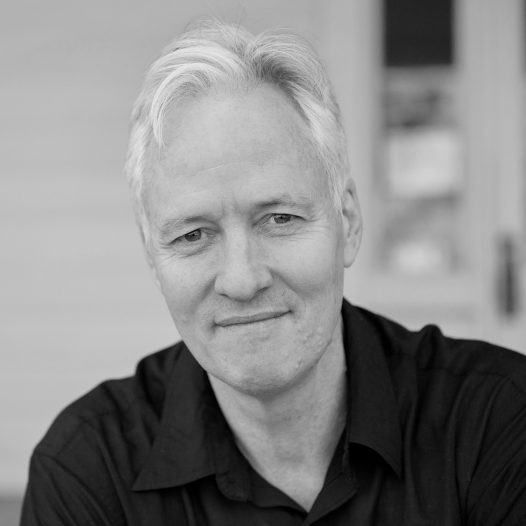 A Conversation with John Biewen

John grew up the fourth of five children in Mankato, Minnesota. He studied philosophy before beginning his radio career as a cub reporter at Minnesota Public Radio. In 1997, he moved to Salt Lake City, where he spent a year as Rocky Mountain Reporter for NPR.

He then spent eight years producing long-form documentaries for American RadioWorks, first in St Paul, Minnesota, then in Durham, North Carolina. In 2006, he became the full-time audio director at the Center for Documentary Studies at Duke University.

His work has aired on All Things Considered, Weekend Edition, This American Life and the BBC World Service.

In 2015, John launched the Scene on Radio podcast. The second season, Seeing White, which examines the notion of whiteness and how racism operates today, was nominated for a Peabody Award. The third season, titled simply MEN, looks at sexism, patriarchy and misogyny. Season 4, The Land That Never Has Been Yet, could not be more topical today, as it explores democracy in America and asks the question “How democratic were the United States ever meant to be?”

John lives in Durham, North Carolina and is currently working on Season 5 of Scene on Radio.

In this episode, John and Tom discuss…

01:54 – Having sisters and playing basketball
03:16 – Mankato, Minnesota, Middle America and the Little House On The Prairie
05:47 – Roots, George McGovern and growing up in a progressive household
09:09 – Becoming a philosophy major
11:32 – Feminism as abstract philosophy and observing the day-to-day reality of women
15:02 – Being in the male minority at a liberal arts college…
16:02 – …with a male-dominated list of notable alumni.
16:34 – Discovering public radio, becoming a cub reporter and a spell in Japan
20:47 – The Founding Mothers of NPR, women in public radio and vocal fry
25:27 – Marriage and the distribution of domestic responsibilities
29:20 – Fatherhood and gender stereotyped toys
33:23 – Parental vulnerability and the bittersweet fear of watching your child grow up
34:47 – Coming to the Centre for Documentary Studies at Duke University
38:19 – The pleasures of teaching
39:40 – The challenges faced by women professors
42:40 – The gender pay gap in public radio and academia
43:13 – The origins of the Scene on Radio podcast
48:03 – How the white man’s perspective became key to the project and seeking a woman’s help for the MEN series
50:40 – Whether the podcast would have been different – and received differently – if it had been made by a woman
51:52 – Taking a gentle approach to engaging men in the conversation about sexism
53:45 – What the 2020 US presidential election might mean for social justice and democracy
57:35 – Roe v Wade, The Handmaid’s Tale and being ‘cautiously hopeful’
1:00:54 – Completing the sentence “If I Had Been Born A Girl…”

John’s first recommendation will be appreciated by anyone in need of sources of optimism in the context of the 2020 US presidential election: an article by Rebecca Traister published recently in The Cut titled Wide Awake: The past four years have birthed a progressive movement so extraordinary it just might survive the forces that threaten its extinction. John adds: “It resonates deeply with our work particularly in Season 4, and captures the moment we’re in, in the U.S., at the moment of this election – and touches on gender as well as race and other questions of social justice. For your listeners who are curious and perhaps baffled by the state of American society and democracy, and perhaps in need of some more “cautious hope” about this all-too-important country, I think it’s a brilliant summation.”

His second recommendation is Down Girl: The Logic of Misogyny by Kate Manne, which he describes as “brilliant and illuminating”. We both second this recommendation and recommend Kate’s latest book, Entitled: How Male Privilege Hurts Women, published earlier this year.

If you’re here, it’s probably fair to say that you appreciate the podcast as a form. If you appreciate the podcast as a form and you haven’t already come across Scene on Radio, then you are in for a treat. In our opinion, it is one of the very best podcasts ever made. Season 2, Seeing White, explores racism and white supremacy, and was nominated for a Peabody Award. Season 3, MEN, examines sexism, patriarchy and misogyny. Season 4, The Land That Never Has Been Yet, questions the very nature and fundamental objectives of American democracy and is an urgent retelling of the story of the United States.

For an introduction to some of the ideas and history covered in much more detail in Seeing White, watch John’s 2019 talk at TEDxCharlottesville on The Lie That Invented Racism.

If you want to hear some of John’s earlier work, visit the Minnesota Public Radio archive, which features documentary pieces recorded by John between 1985 and 2004. We recommend the episode Voices Of Age: Life After 100, featuring a 22-year-old John and interviews from a fascinating range of Minnesotan centenarians. His voice hasn’t yet acquired the magical timbre it has today, but traditional though the format of the show is – maybe it’s just us – we sensed the grain of the future master producer. You can also find the original version of John’s O Freedom Over Me documentary about the Freedom Summer of 1964, which he subsequently reworked for the Scene on Radio Seeing White season. And if you want something shorter – and lighter – try the short 1996 piece, Cars That Blast Loud Music, about “young men with big woofers”.

A selection of shorter pieces which John produced or presented is available on the site of the Third Coast International Audio Festival. They include the short documentary Scared about “the bittersweet fear of watching your child grow up”.

If you want to get a better understanding of how a great piece of documentary audio work is made, then you really should listen to John’s talk Sure-Handedness: Radio That Knows What It’s Doing at the 2012 Third Coast conference.

It may be less hard-hitting than much of what followed on subsequent seasons of Scene On Radio, but we challenge anyone to listen to the episode I Know It’s You from season 1 and not be moved.

If you’re interested in the history of public radio – and in stories of pioneering women who shaped an important part of American culture, learn more about the Founding Mothers of NPR: Cokie Roberts, Susan Stamberg, Nina Totenberg and Linda Wertheimer.

The Columbia Journalism Review’s piece to which John refers during the interview appeared in 2019 under the title The Man Who Saw Himself.

Last but not least, if you want to hear John talk more about himself, our favorite amongst his appearances on other podcasts is on Rachel Zucker’s wonderful Commonplace: Conversation with Poets (and Other People).

Episode 7
A Conversation with John Biewen